Opportunity in the Midst of Transformation

It has been a dramatic and anxiety-inducing week. Like many of you, I have been glued to the news trying to understand what I need to keep myself and my loved ones safe, and what this means for Alaska as a whole.
The week started  with a severe downturn in the stock market and the largest plunge in oil prices in years. Prices continue to fall, the combined result of anxiety over COVID-19 and a price war between Russia and Saudia Arabia. The American shale industry is also convulsing as a result.  Even publicly traded majors like Exxon took measures. The in-state media has been surprisingly quiet as Dunleavy downplays these events, calling it “a momentary glitch” (while at the same time talking out of the other side of his mouth to limit government travel as a result of the market crash). His office hasn’t released new budget plans, however.
As oil prices drop and municipalities are looking at losing huge percentages of their annual revenues as people cancel their cruises and flights, it’s increasingly clear that we need to stop giving $8 credits per barrel to the oil companies no matter how low the oil price goes. We have no tax base. Contact your legislators, and let them know you’re paying attention: we need oil tax reform now.
Hilcorp, the company hoping to acquire BP’s Alaska holdings, is a clear casualty of the week’s events, and that has impacts for Alaska. On Monday, company founder Jeff Hildebrand and other oil magnates saw their fortunes vanish. That same day Phil Wight, in a News-Miner op-ed, laid bare how financially extended Hilcorp already was in their play to buy up BP’s share of the pipeline, so much so in fact that potential investors were asking Hildebrand to pony up his own fortune. Why should the state of Alaska take on that risk? State regulators have been fast-tracking this deal, and our legislators have failed to push for a real compact, as they have with comparable past corporate transfers. Alaska’s fate shouldn’t be left up to Outside companies, especially secretive, private LLCs that are not beholden to shareholders nor pay income tax.
Though our elected leaders may not be thinking proactively, several banks, the potential creditors who Hilcorp will be turning to, are lining up one after another to say that expanding Arctic drilling is too risky. Goldman Sachs and JP Morgan Chase, were joined last week by Wells Fargo. These banks  have held up the oil and gas industry and their policies are the writing on the wall.
Governor, this is no momentary glitch. This requires a response.
But right now we do  have a particularly important moment to reflect on the path of our state and the future we want and need. Booms and busts are a fact of global commodities markets. When  a state depends on a single commodity, that state is destined for bust. Kara Moriarty, who I am not in the habit of agreeing with, said earlier this week, “focus on things you can control and (oil) price isn’t one of them.” That’s right. We have to know that we have structured a system that can break with a single decision made in Riyadh. We need to take control and look at the efforts that are ongoing in our state to protect our sacred lands, address the climate crisis that is already affecting our communities, and build a more just and diverse economy that will support us for generations.
What is clear to me right now is that we are in the midst of transformation. In resilience theory, there is a model called the adaptive cycle, which  explains how systems transform over time. Following a period of growth and increasing rigidity, inevitably there is a release where relationships break down. This collapse of oil prices is an indicator of such a release happening in our own political economy in Alaska. Or, in other words, a bust.
But after the release, there is an opportunity. There is a period of time when new relationships can be built, new structures can emerge, and the system can move to a more resilient state. So while this is definitely a period of anxiety, it should also be seen as a time of hope. Now is the time to be thinking creatively and proactively about the future we want to build together.

It’s also a time to look out for each other, to find ways to heal and center ourselves outside or with a good book, to wash your hands and clean your homes “like you are washing the only teacup left that your great grandmother carried across the ocean”, and to embrace the incredible change and transformation that our corner of the planet undergoes as Spring returns. 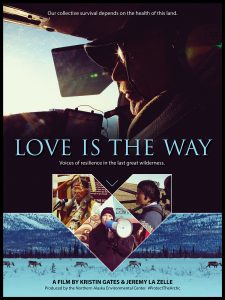