As a lifelong Alaskan I know how much I currently rely on oil, for my daily lifestyle and my state’s economic engine. I also know that oil extraction and combustion is threatening life as we know it.

The contradiction of reliance on, and threat from, oil is at the heart of what it means to be Alaskan today. The decline in oil prices, the pandemic, and climate catastrophe have brought Alaska’s economic vulnerabilities into stark focus. Alaska Native communities are bearing the brunt of these intersecting crises. Trying to reconcile my hope for a diverse, regenerative Alaskan economy with the harsh reality of our mounting urgency and depleted resilience in the face of COVID-19 galvanizes me to dig deep.

I’ve spent much of my time off this social-distanced summer hiking outside. I’ve borne witness to how rapidly our landscapes are changing while negotiating miles of heaving, unstable, thawing permafrost. I’ve thought about what it means to live in precarious times while balancing on precarious ground, jumping between thick tundra mats with a heavy pack on, gazing down into deep crevices of bare mineral soil.  How do I live with integrity while knowing that every time I drive my car to a trailhead my fossil fuel consumption is contributing to the destruction of the home I love?

The Arctic Refuge is Open for Drilling

I’ve been bracing for this moment since Murkowski snuck revenue from drilling the Arctic National Wildlife Refuge into the 2017 Tax Act.  The Trump administration is doing all it can to push a lease sale through before the end of this year. The outcome of this election is pivotal for the Refuge and so much more and if you haven’t already, stop reading this and register for your absentee ballot, remind your friends, and help get out the vote.

In the wee hours of a midsummer Alaskan morning, the Trump administration released its Record of Decision to move forward with the Arctic Refuge Oil and Gas Leasing Program. We woke up on August 17th to learn that we were a massive step closer to our government selling leases for short-sighted corporations to extract oil from Iizhik Gwats’an Gwandaii Goodlit, ‘The Sacred Place Where Life Begins.’ The administration’s decision “…disregards the inherent inalienable rights of the Indigenous people — not only the Gwich’in who depend on the Porcupine Caribou herd — but also those Iñupiaq people in Kaktovik who want to protect the refuge,” as Karlin Itchoak, Alaska director of The Wilderness Society, said.

Meanwhile, more than a dozen financial institutions around the world have ruled out financing oil and gas exploration and extraction in the Arctic, and specifically in the Arctic National Wildlife Refuge, including five major US banks (Citi, Goldman Sachs, JPMorgan Chase, Morgan Stanley and Wells Fargo), and most recently, the Royal Bank of Canada. This is not politics, this is cold hard business. Banks are recognizing that the high production costs and low price of oil, not to mention infrastructure instability and other uncertainties due to climate change and poor public perception, make the Arctic a risky investment. This groundswell shift signals a broader change within financial industry best practices of what’s perceived as fiscally responsible and what’s socially acceptable.

What are people saying about these decisions?

In a surprising twist, Sens. Lisa Murkowski and Dan Sullivan with Rep. Don Young, alleged that banks’ refusal to fund Arctic oil discriminates against Alaska Native people. This dangerously confuses banks’ actions with longstanding attacks on sovereignty and self-determination. The widespread, ongoing focus on racial injustice could have compelled our elected leaders to contemplate the disproportionate ways Black and Indigenous Alaskans are impacted by police brutality, COVID-19, and climate to name a few crises, but instead they co-opted and misused terminology to frame fossil fuel companies as victims of injustice.

“When Alaska’s congressional delegation sides with the corporations rather than the Alaska Native nations it is for blatant interest in oil and gas profits, not people and definitely not for racial equity.” -Siqiñiq Maupin, Sovereign Iñupiat for a Living Arctic

“This is an egregious manipulation of the current crisis we are facing in this nation….Why have they spent their careers ignoring the true cause and cost of the climate crisis, as Indigenous villages slip one by one into the ocean and hunters trying to feed their families fall through prematurely melting ice?” -Bernadette Dementieff, Gwich’in Steering Committee

Don Young explicitly grappled with hypocrisy and  asked why these same banks still invest heavily in fossil fuels elsewhere, highlighting China’s oppression of Uighur people and Saudi Arabia’s oppression of women. I thank him for holding the banks to a high standard. I also ask him to consider his own hypocrisy in claiming that “oil can be safely extracted while protecting the environment and respecting the culture and traditions of Alaska Natives” given countless climate injustices taking place across Alaska. Don, don’t forget about the many Alaskans who oppose drilling, because we are the hypocrisy in your claim that “our state supports drilling.” We are not part of just “a handful of internet environmentalists” and no, we are not succumbing to “groupthink and mob mentality of left-wing environmental extremists.” We are Alaskans who are ready to reconcile and resolve our complex needs for fossil fuels with our obligations to a livable climate.

Which corporations should Alaskans be focused on now?

Our focus is now on Hilcorp, Arctic Slope Regional Corporation, Chevron, and Bank of America (the only major U.S. bank that hasn’t ruled out financing projects in the Arctic Refuge).

Alaska Native leaders have achieved unprecedented shifts in financial institutions’ engagement with arctic oil after months of meetings with big bank executives. As Alaskans, we are uniquely positioned to support their efforts by continuing to pressure Bank of America, the final big bank holdout because a lot of us have Alaska Airlines credit cards, which make us Bank of America account holders. I’m a frequent flier myself, pre-pandemic that is, and while I am reluctant to cut up my credit card and give up my annual companion fare, I along with 67 other Alaskans, did call Bank of America and to tell them why Arctic oil is bad business.

Take action today and tell Bank of America and Chevron to listen to the Iñupiaq and Gwich’in leaders who are defending sacred lands from the Trump administration’s recklessly expedited agenda of resource extraction.

“As a growing number of major banks are making the right decision, all eyes are on Bank of America to see whether they will follow their peers or continue to stand out in their disregard for the rights of Alaska’s Indigenous people.” – Bernadette Demientieff & Siqiñiq Maupin

Can Alaskans afford to leave our fossil fuels in the ground?

Given climate projections, we can’t afford not to.

It’s one thing to oppose oil and gas exploration and extraction from the Arctic Refuge, and another to navigate the complexities of stopping all fossil fuel extraction in Alaska. There are massive projects proposed in the National Petroleum Reserve (you can follow the Integrated Activity Plan and the Willow Master Development Plan here), Shell seeks to extend their offshore leases, and Hilcorp recently acquired  BP’s Alaska assets. Oil revenue has funded the state of Alaska’s budget my whole life. We need to unravel contradictions of the existential threat climate chaos poses to our planet – and thus to us – with how we all rely on hydrocarbons to fuel our economy and our daily lives. I am a Bank of America customer solely for the perks of an Alaska Airlines credit card. Travel is the bulk of my carbon footprint and flying is by far the most fossil fuel-intensive mode of transportation. Critics often point out that greenies use oil and gas too, as if it’s a revelation, and that’s exactly the point we’re making when we say we are all dependent on it and we all need something better, something that is not killing all of us.

I’m acutely aware of Alaska’s economic dependence on oil. I grew up partaking in BP-funded youth programs, so most of my t-shirts had their logo on them. I grew steeped in the mythos that oil will always be Alaska’s past, present, and future. I also know it’s not a question of if, but when, the pipeline, the alleged lifeblood of our economy, stops flowing. Instead of living in active denial of this inevitable reality, let’s proactively plan for that time, and diversify our economy beyond fossil fuels. We can’t afford to continue subsidizing a dying industry to drill for every last drop. The State of Alaska gave $1.2 Billion in tax credits to oil companies in 2019 alone. Those are taxpayer dollars that are being used to incentivize climate destruction instead of funding climate adaptation that is projected to cost Alaska $30 Billion. We are paying an oil subsidy bill that makes us have to pay an even larger climate adaptation bill when we already can’t balance our budget.

I want to fight for a livable climate without jeopardizing funding for our most basic infrastructure.

So many Alaskans are already dealing with financial uncertainty, compounded by COVID; let’s build out the fossil-fuel-free sectors of our economy and add sustainable jobs to replace the time-limited oil jobs. Transition is inevitable, justice is not. Alaska has a rapidly closing window of opportunity to shape our future by investing in a Just Transition off of fossil fuels. Our hand is already being forced, by both peak oil and peak demand, and the climate crisis will increase the urgency. We don’t have to be a resource colony, as some elected officials seem to believe. We can learn from and strengthen the longstanding and ongoing Indigenous economic systems and ways of life in Alaska, systems that serve their own communities, lessen dependence on fragile transport systems that do harm while making people reliant on them. I’m inspired by Rainy Hopson’s gardening work in Anaktuvuk Pass, AlexAnna Salmon’s hydroelectric among other innovations  in Igiugig, Spruce Root’s community-driven  economic development work in Juneau, and planning efforts led by the Native Village of Port Heiden.

Even though the realities of the COVID-19 Pandemic mean I’ve stopped flying in planes and hardly drive anymore, I still consume oil and gas everyday. Navigating cognitive dissonance is a daily part of my pandemic reality because our human brains aren’t wired to handle many of the complex decisions we face daily. Since moral reasoning and risk evaluation are not people’s strong suits, our imperfect judgement needs to be guided by strong leadership.

Let’s elect leaders who are ready to get creative and proactively address the root causes of these intersecting crises so that future Alaskans can also enjoy what we treasure. This is our chance to make sure we don’t return to “normal” and rather than entrenching the status quo and extracting Arctic Refuge oil for corporate greed, instead use this period of profound transformation to invest in a bright future for  Alaska. 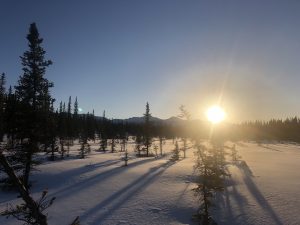